As I mentioned in my first article, my daughter decided to cosplay as Link from Legend of Zelda this year at Awesomecon.  The first part of this that I started working on was Link’s Master Sword.  The reference picture I got was from the Ocarina a of Time version. 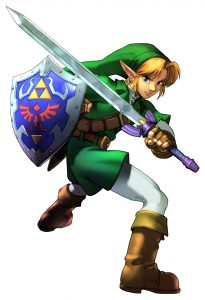 The research began to figure out how to make a sword that would be allowed at Awesomecon.  Couldn’t be made of wood or metal.  I have bought and read several books over the years written by Kamui Cosplay and ever since I’ve wanted to try out working with Worbla.  Worbla is a thermoplastic that gets soft and mold-able when heated with a heat gun, then gets hard when it cools down.  It works well when you sandwich it over foam.  I figured I’d use foam for the sword and put worbla over it to make it a bit more rigid.

So I ordered two large sheets of worbla and while waiting for them to arrive, started trying to figure out the rest.  The first challenge was the foam.  I went to Five and Below and picked up a couple of $5 yoga mats. 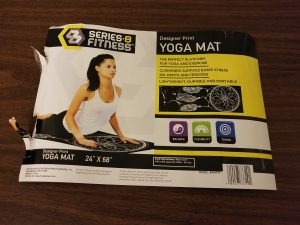 Problem is, they have a rippled pattern on them.  So I bought one of those mouse sanders (disclaimer: not to be used on actual mice, that’s just what they call them) to try and sand the pattern off.  Worked fairly well. 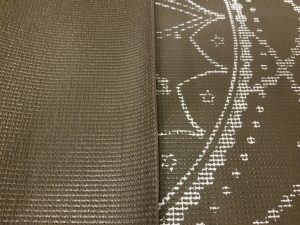 Next step was to make a pattern.  I bought a roll of brown packing paper to use for patterns and drew the outline of what I wanted the sword to look like on the paper and cut it out.  I used the pattern to trace onto the yoga mat with a black sharpie magic marker, then cut it out with scissors.  I needed several layers so I started with three and did a trial sword out of that by gluing them together.  By that time the worbla had arrived and turned out to be a bit more flexible than I had thought.  This was going to need more support.

I got a wooden dowel from the hardware store and decided to stick that in the middle of about 5 layers of sanded down yoga mat. 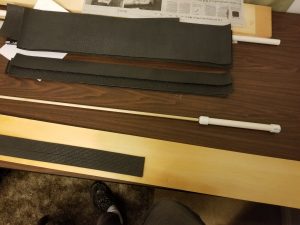 I got some pvc pipe with some caps to use for the hilt and used a dremel tool to cut a hole in one of the caps for the wooden dowel to fit through.  I cut the edges of some of the layers of yoga mat so it would have a tapered effect and come to a small edge at the sides, then used the dremel tool to sand down the edges to make them a bit smoother. 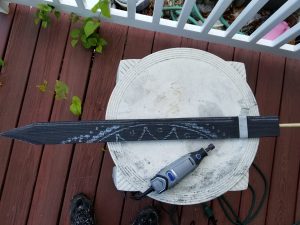 I took a piece of floor mat, split it down the side with an exacto knife (so I could have the smooth side out on both sides) and shaped it into the shape of the wing things on the sword with the dremel tool.  They looked like they would work out OK, but I had to figure out how to attach them.  I decided to use the worbla for that and wrap it around the PVC pipe. 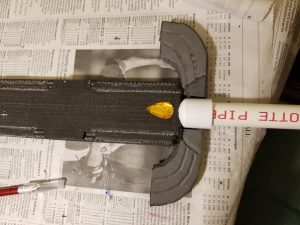 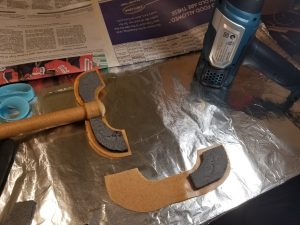 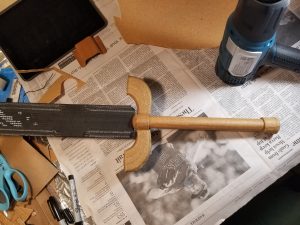 Then I needed to wrap worbla around the blade part.  The trick here is to not get the worbla TOO hot.  If you get it really hot, any little pattern from the foam underneath will be shown in the worbla.  By just getting it hot enough to stick and shape, you keep that from happening. 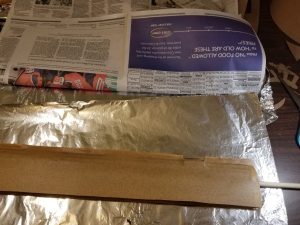 Once it was shaped over the foam and stuck together, I let it cool a bit, then trimmed off the edges.  I then reheated the bottom of the blade and the top of the hilt to attach them together.  I had intended on putting some glue in place to hold the dowel more solid but forgot about it until it was too late.  The worbla so far seems to hold it in place alright though. 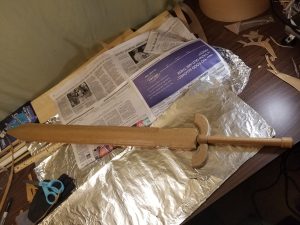 Next came the paint job.  I used some black paint plus primer and gave it about 8 coats on one side then let it dry for a day.  Then turned it over and did the same thing on the other side and let it dry a day.  Problem is, by then, I was running out of days.  There weren’t enough days to paint each side chrome and wait a day so I used something that you stick in the ground to hang plants on, then used some zip-ties on the hilt to hold it in place.  This let me paint both sides of the blade at the same time. 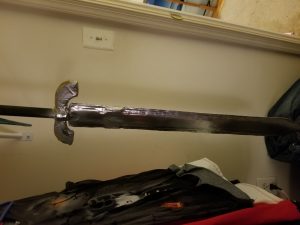 Blade turned out really nice.  I would have liked to have let it dry for two days but I was running out of time so I had to paint the hilt earlier than I wanted.  I taped off the top of the blade and painted the hilt.  I then hung it up to dry thinking I would remove the tape after about a half an hour. 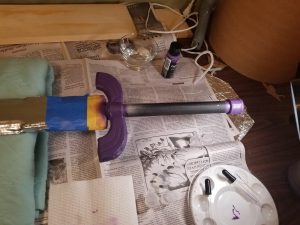 About 8 hours later, I remembered the tape!  Oh no!  I pulled off the tape and it left marks all over the sword where it had been.  NO!!!  The next day, I hung the sword back up outside and used a piece of cardboard to block the hilt, then hit the blade with the chrome spray paint for a very careful single coat.  That got rid of the marks that the tape had made and it was back to looking great.  All that was left was to use a hot glue gun to stick the gems on each side of the blade (found a bag of assorted ones on the internet and had them shipped), and wrap some blue ribbon type material around the hilt using a hot glue gun to stick it down and hold it in place.  Turned out great! 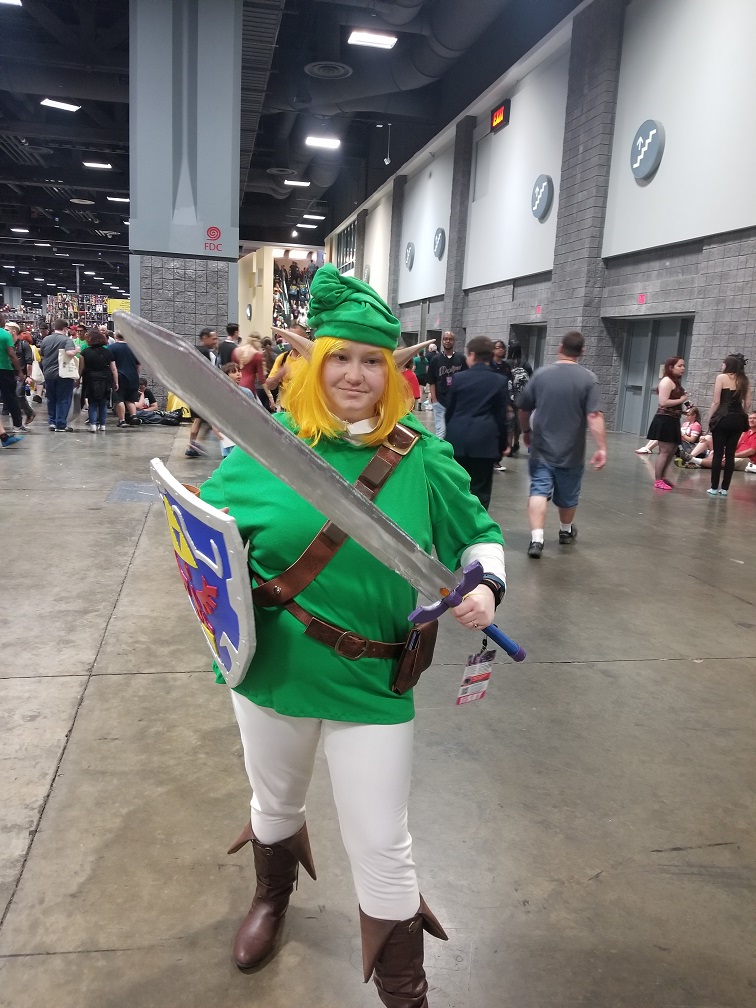 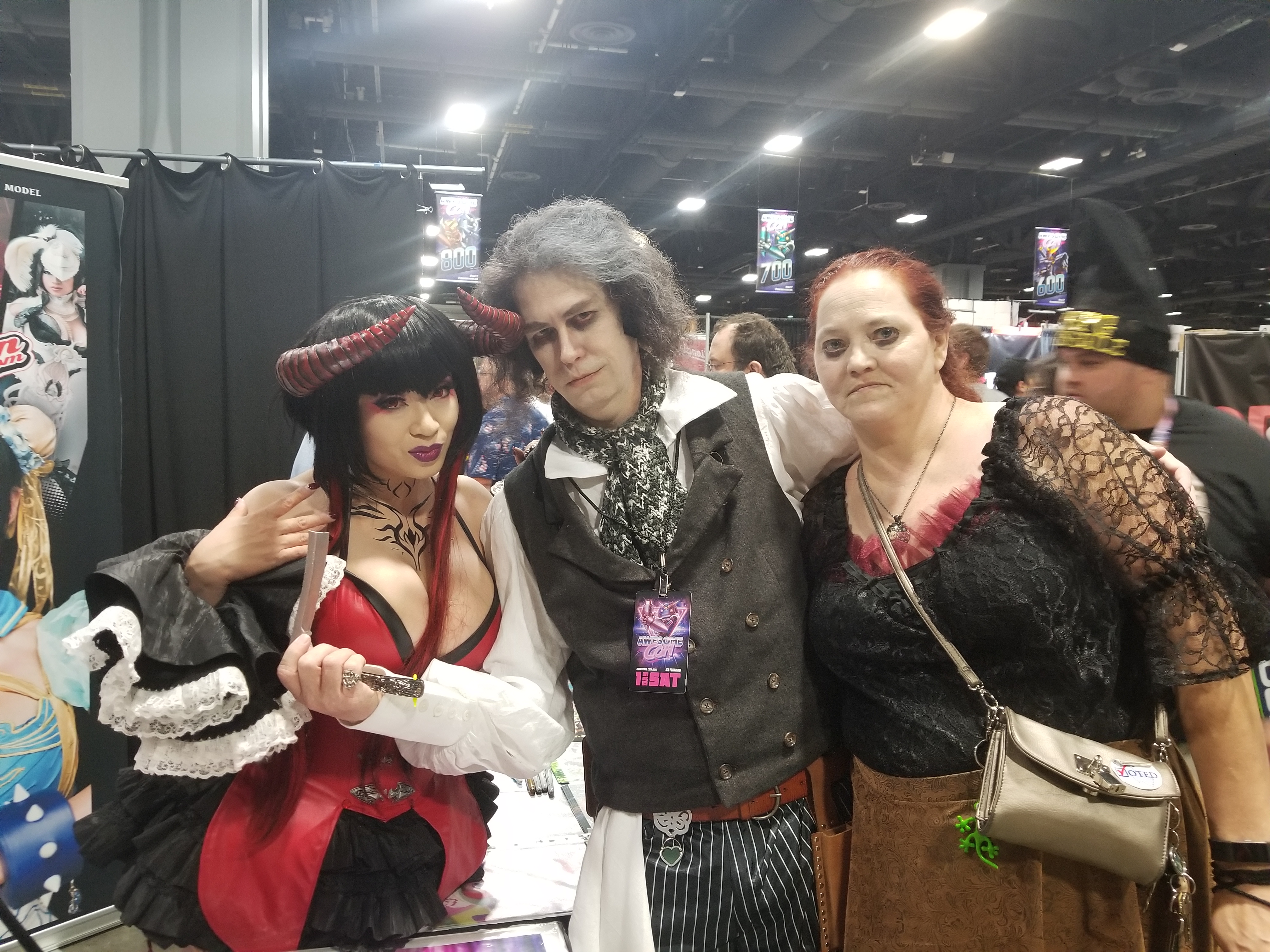 What Have I Started?

For as long as I can remember, I’ve been a SciFi/Fantasy fan.  At an early age I remember going to a couple of Star Trek conventions and having a blast (that’s what we had back Read more…